Curious about what kind of results come from working with a nutritional therapist? What do my clients say about me?

I really understand that the investment in working with me 1:1 might seem a bit overwhelming at first. So I want to share with you what kind of changes are possible, and how I’ve helped my previous clients.

Read the story of how some of my previous clients improved through their digestion through working with me 1:1.

“It’s changed my life after years of symptoms”

Heidi, came to me for support because she seemed to react to anything she ate and had daily disabling stomach pains.

The doctors didn’t know what else to do with her, after multiple tests and specialists and she was feeling stuck.

Heidi cut out gluten from her diet and focussed on increasing diet variety. We used some supplements to support her digestion of foods, and reduce inflammation.

Progress wasn’t linear, and sometimes there were weeks when her digestion struggled, but by the end Heidi was better able to draw a line between sleep quality, stress levels, what she ate and resulting symptoms.

We also worked on lifestyle changes to support better digestion, such as when to eat, how to manage stress and creating healthy habits. 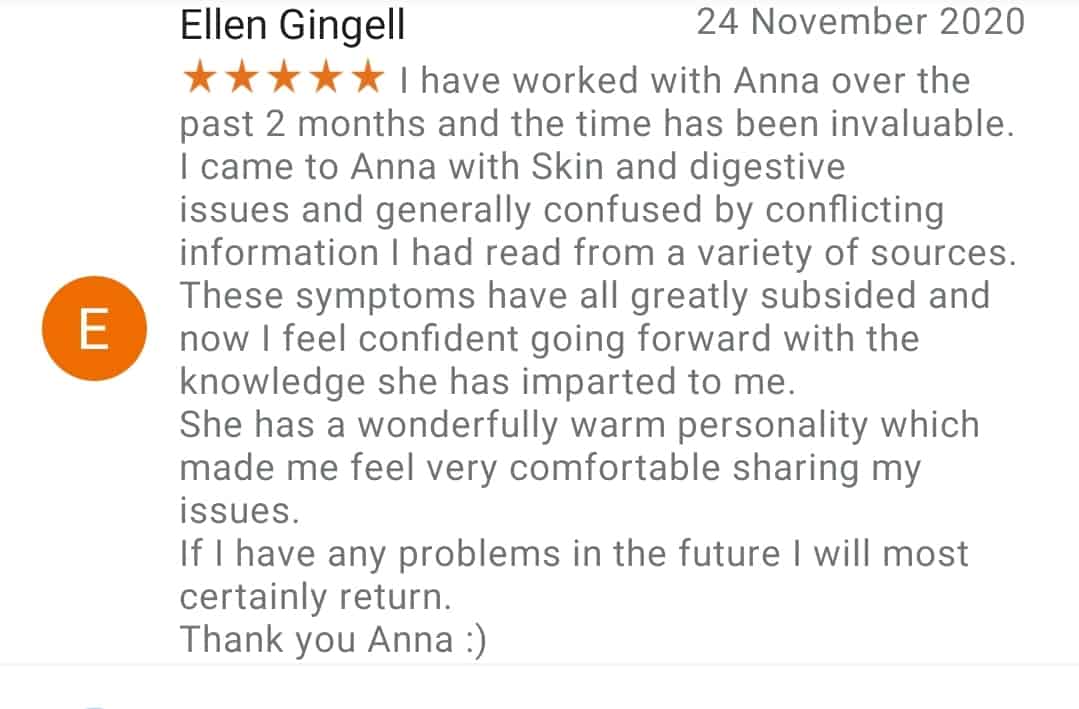 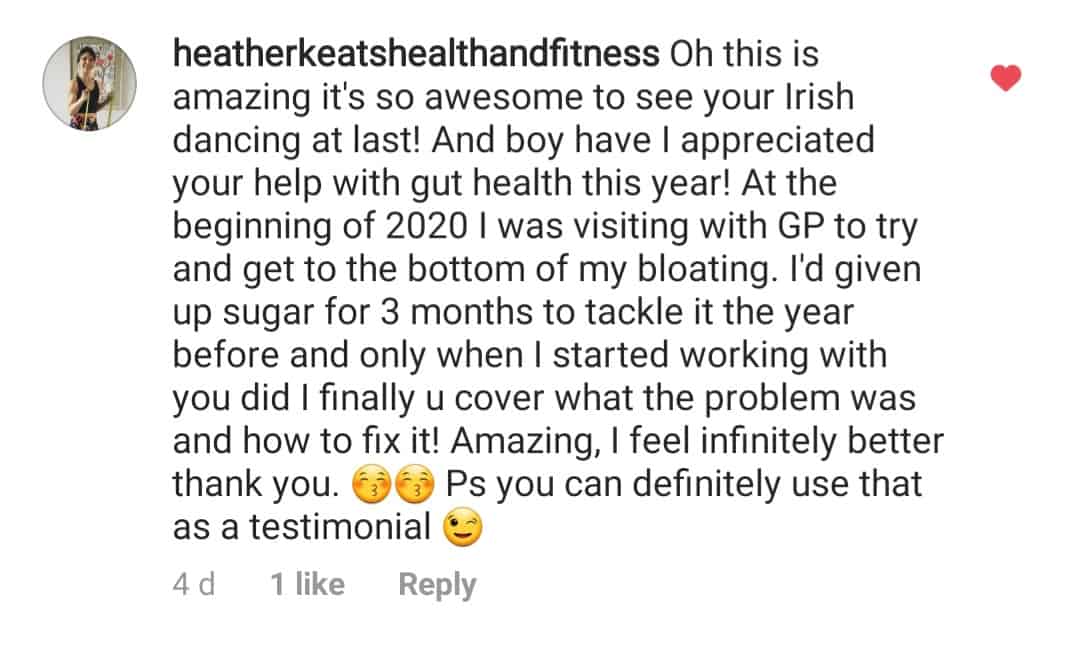 “I’m waking up feeling refreshed and have more energy”

Sally, 30, came to me for support with constipation she had been experiencing since she was a child. She described her overall health as feeling ‘lacking in energy, exhausted all the time, and not myself’.

She’d had a food intolerance test around 15 years ago which had led her to give up gluten. She was having bowel movements every day or every other day, but they were hard to pass, even splitting the skin.

Sally was using laxatives to soften the stool every week. Her energy was low, feeling ‘jittery’ if she missed a meal, and her periods were very painful with PMS symptoms.

Sally’s digestion improved over three months, and there was no more painful bowel movements. She got to know her digestion better, and understood how differences in diet and activities influenced her symptoms.

Her periods were easier, less heavy bleeding, with less clotting, and less spotting at the end.

She began to wake up feeling refreshed, and with more energy, her concentration had improved.

We reintroduced gluten to her diet and focussed on high fibre foods to help add more bulk to the stool. Sally also increased her protein, and water intake. We used some supplements to aid digestion and breakdown of food, and nutrients to support stress management.

We talked through several approached for encouraging a better bowel movement, such as positioning on the toilet, the role of yoga and exercise, and managing stress.

She had less need for a laxative, but on occasion it was needed, she changed the type of laxative she was using to one that softened the stool rather than stimulating a bowel movement.

We focussed on calcium foods to support a healthy dairy free diet. 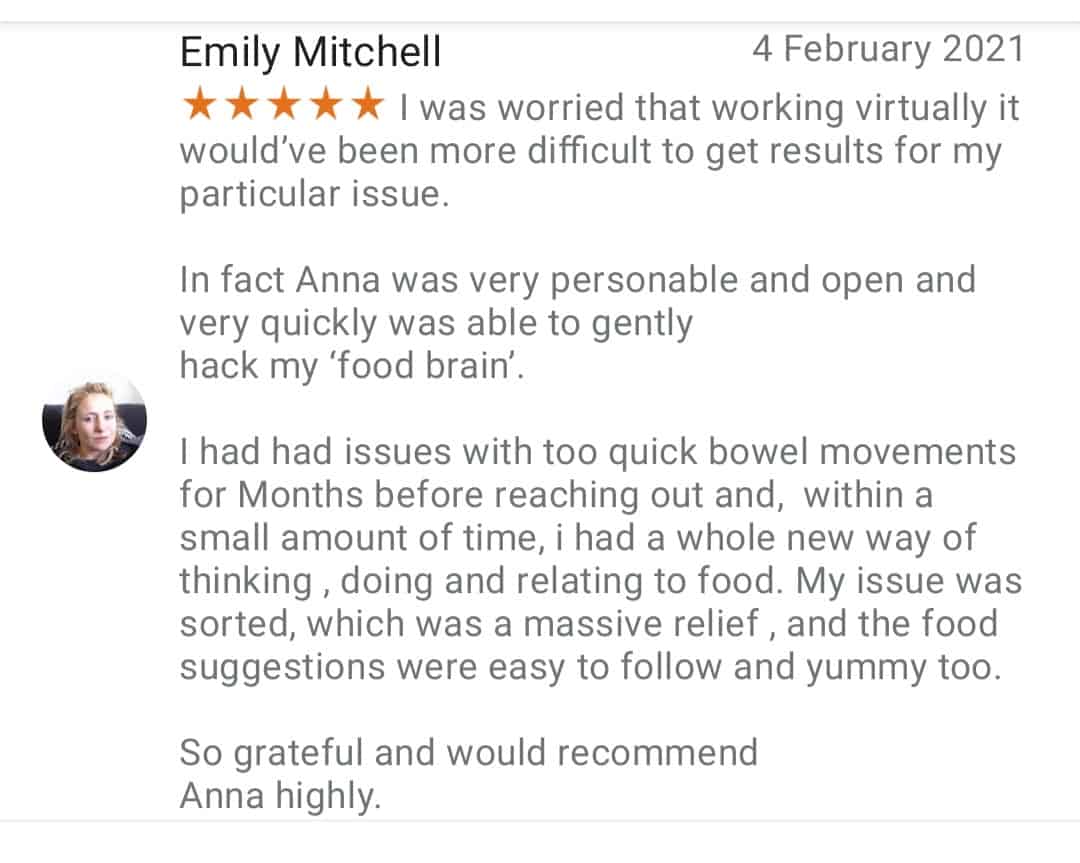 “My digestion was a problem for decades, now it’s sorted”

Jenny, 29, came to see me for weight loss and fertility preparation. As part of the initial consultation she mentioned how she had a bowel movement on average 11x a day.

Doctors had told her to learn to live with it, it was ‘just IBS’.

She was stressed, not sleeping well and had issues with low mood and had been trying to restrict her food intake for years to lose weight.

Within two months Jenny had normal bowel movements and wasn’t reacting to everything she ate.

Through an improved diet she had more energy for exercise.

Emotional Eating – Importantly, throughout a very chaotic and stressful nine months, she managed to avoid using food as a method for dealing with stress, as she had previously done.

She began to wake up feeling refreshed, and with more energy, her concentration had improved.

Jenny focussed on increasing her protein, and water intake. We used some supplements to aid digestion and breakdown of food, and nutrients to support stress management.

She said she never anticipated her digestion could be improved after all the years of experiencing symptoms.

It was valuable to think about diet in a different way, and learn how to suport her body.

How can I help you?

I speak to a lot of people who struggle with bloating and a dodgy tummy.
Often they have to run to the loo after eating certain foods, but they feel like it’s just part of who they are, it’s just how they’ve always been.
They tell themselves that they’ve tried everything possible already, and nothing will improve their digestion.
And I get it.
We can make this sound pretty logical. We can research diets on the internet every night after dinner, try eliminating foods and go for repeated appointments at the GP, but you can’t find the right solution.
If you have a problem with dodgy electrics in your house, you get help from an electrician.
You might even need to spend money on re-wiring the house.
You don’t mess around, because it’s important.
So my question to you is… how much of a priority is it for you to sort out your digestion?
Is it important enough to take action?
As for the risk factor… consider this: what are you stopping doing in your life right now because of your sensitive tummy?

If you’re reading this and thinking, “This is a 10/10 priority and I would love to find a better way of eating, instead of googling my symptoms all evening’ then send me a message and let’s chat.

We’ll arrange a quick free call and chat about what you’re struggling with. If I think I can help you, I’ll let you share how I work and you can decide what to do next.
Contact me to arrange a time to speak to me. 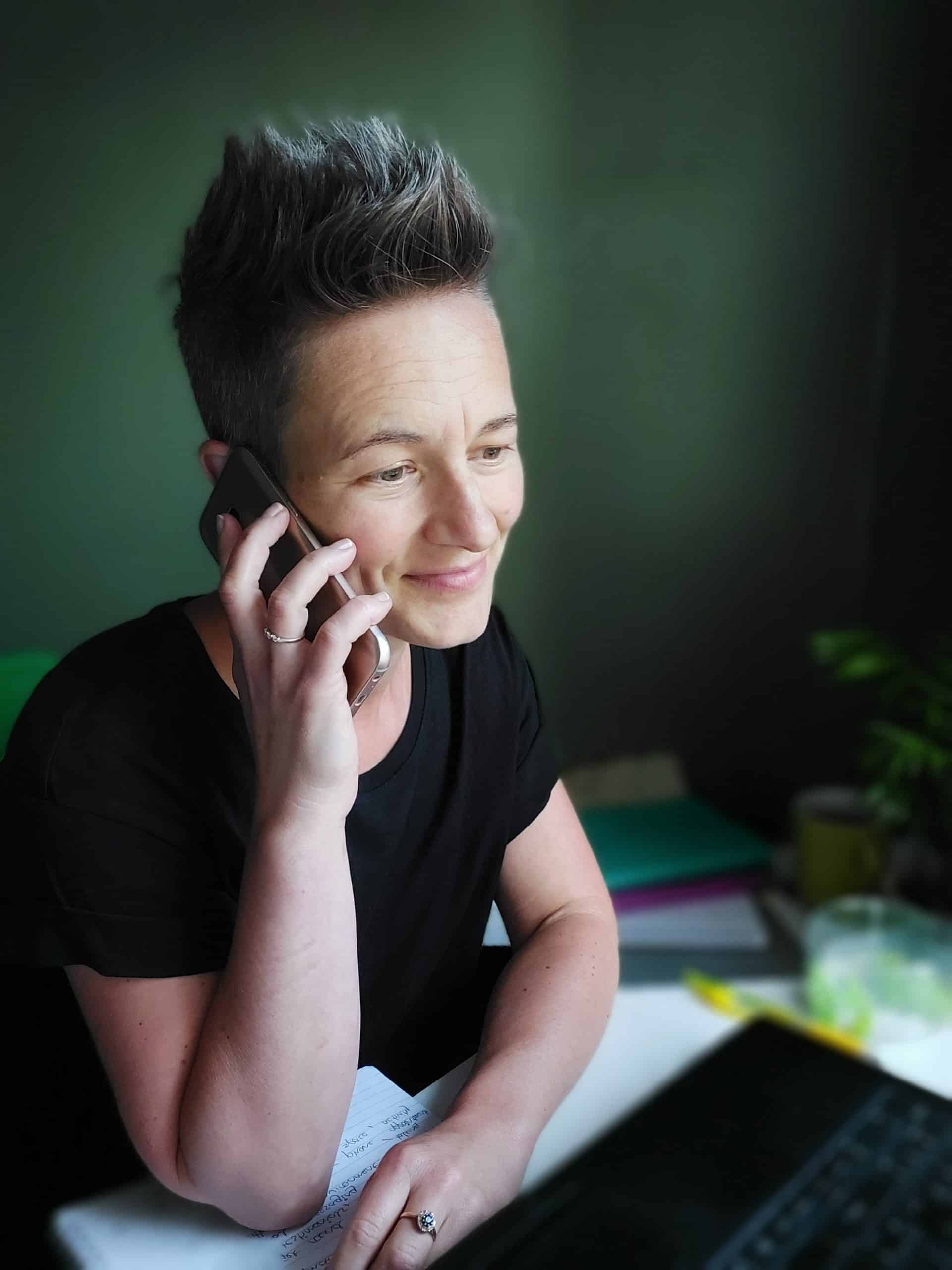